Every day, half of America eats one or more sandwiches, mostly for lunch. That computes into 300 million a day. They’re easy, they’re filling, no muss, no fuss. And you don’t even have to know how to cook. The varieties are endless, so where do we start? The short list includes the BLT, Grilled Cheese, Club, Dagwood, French Dip, Monte Cristo, Muffuletta, Pastrami or Corned Beef on rye, PB&J, Cheesesteak, Po’ boy, Reuben, Sloppy Joe, Submarine, Fried Egg. It’s endless.

The British first referred to “bits of cold meat” as a “sandwich,” named after John Montagu, 4th Earl of Sandwich, who was an eighteenth-century aristocrat. Legend has it that he instructed his servant to bring him some meat between two pieces of bread while he was playing cards with his cronies. Apparently he could play uninterrupted, as the bread acted as a napkin (rather than his sleeve) and kept the card table tidy. His cronies caught on and followed his lead. What was in them we’ll never know, but what a beginning (the Earl will never know). 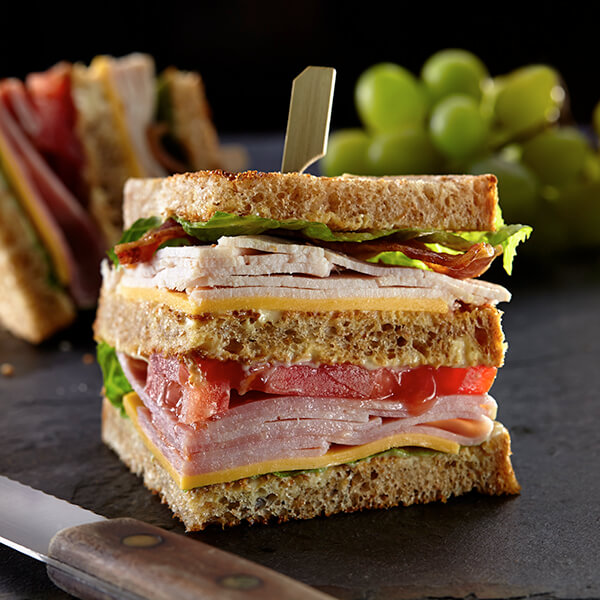 Let’s check out these favorites:

1) Elvis immortalized the fried peanut butter and banana sandwich, although there’s not a big call for the.

2) Dagwood, named after comic strip Blondie’s husband, stacks up fillings and bread, impossible to eat except in sections, but somehow Dagwood Bumstead managed.

3) The French originated this sinful sandwich in a Parisian cafe in 1910; there is no one named Monte Cristo but simply a French term (Croque Monsieur) to describe a fried sandwich of ham and cheese, not on any weight loss program to be sure.

4) Sloppy Joe: kids grew up on these tangy and messy sandwiches. Its origin dates back to the 1930s and was created by a short order cook named Joe in Sioux City, Iowa. Originally called a “loose meat sandwich” it seems Joe added tomato sauce which cranked it up a notch; as its popularity grew, Joe wanted to get credit and renamed it after himself. Folks in Key West Florida insist it was dreamed up at a local bar called Sloppy Joe’s. Some historians want to give Cuba the credit, but let’s just give it to Iowa, okay?

5) Submarine: sub sandwich shops seem to multiply daily with no end in sight; also known as hoagies, heroes or grinders in the U.S. with a multitude of fillings, they come in foot long and smaller sizes, perfect for Sunday afternoon TV sports or a quick lunch.

6) Club: undeniably the grande dame of sandwiches. Historians track its creation to the Saratoga Club House, an exclusive gambling joint in Saratoga Springs, New York. Since its inception in 1894, the standard ingredients haven’t changed: toasted bread, lettuce, tomato, sliced turkey or chicken, bacon,and mayonnaise, and don’t forget the toothpicks. The BLT is a first cousin to its predecessor, without the turkey/chicken or third slice of toast. The Club has stood the test of time. Its only controversy is the turkey/chicken debate. (World-class chef James Beard insists on chicken.)

7) If you’re a New Orleans resident, the sandwich of choice is the Muffuletta, whose popularity is claimed by the Central Grocery where it got its start. A large round loaf of Sicilian sesame bread is loaded with Italian sliced meats and a spicy Creole olive salad. (If you don’t live in New Orleans, you’re on your own.)

9) Reubens and pastrami or corned beef on rye take top billing at any self-respecting deli, especially Jewish. Slather on some mustard, add a few Kosher dill pickles and you’re in business. For a Reuben, throw in some sauerkraut and thousand island

10) Those Louisiana folk sure love their originals. The Po’ Boy is basically a sub filled with meat or fried seafood, similar to the Northeast’s lobster roll.

11) Oh boy, don’t ask anyone from Philadelphia about Philly cheesesteaks, because they are fanatical about them. Be prepared for a long-winded answer. The same goes for Chicago’s most popular sandwich, the Italian Beef: Italian bread loaded with thinly sliced beef, topped with peppers and dripping with jus, hold the cheese; all-American French dip (in spite of its name) is a take-off, but rather bland by comparison.

12) Can’t leave out those wonderful “bound” fillings: egg salad, ham salad, chicken salad and tuna salad; we corner the market on those, whether they’re daintily served at teas and parties or just a big old scoop on whole wheat.

13) Hamburgers and chicken fast food sandwiches are a whole other subject.

We’re not even going to get started on sandwich cookies (Oreos) and ice cream sandwiches. It’s too exhausting. So many sandwiches, so little time.